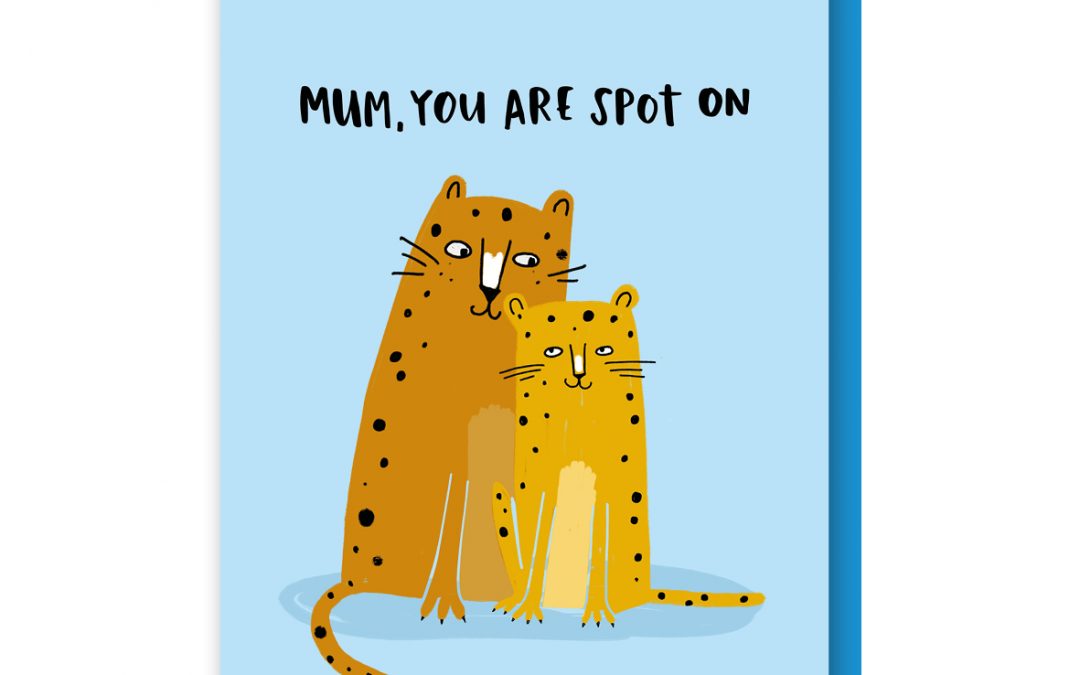 As a ‘crazy cat lady’ (or as illustrator Gemma Correll would say, ‘insane pussy woman’ – you have to love her), I was excited to comment on the recent feature in November’s Progressive Greetings magazine on big cats, which are ‘currently prowling all over cards, gift-wrap and anything else they lay their big untamed paws on’.

So, why has the nation suddenly become so fixated on wild cats? Progressive Greetings names a few reasons: the tropical trend and Frida Khalo influence and the BBC Big Cats TV Series being just two. But my own love of the big cat stems from my experiences with domestic cats. I have two of my own, both completely different in personality, appearance and size (one is an absolute chunk – a tabby with a squishy gut, and the other a feisty black and white gremlin). When watching good old David Attenborough, I can’t help but draw similarities between themselves and my own fur-babies. They move the same, play the same and hunt the same. They’re agile, loving, resourceful and fun. They’re completely awe-inspiring. Cat owners can’t help but house feelings of fondness towards these majestic giants: we see too much of our own pets in them. Why wouldn’t we want to buy cards featuring these big fluffballs?

But another, more sobering reason that I see the big cat trend catching on is because of how endangered these animals are. I’m sad to think that over the last century, we have experienced a shocking number of big cat extinctions, some even in my own lifetime, and the majority of this is down to us humans. We hunt things beyond recovery, and only regret it once it’s too late. For me, the emergence of the big cat trend onto cards is not at all surprising and is a really positive thing. Big cats popping up on high-street shelves serves to remind us of what we stand to lose. I’m hopeful that it encourages more people to be proactive and fight to protect these endangered creatures.

What is also hopeful to see is that today’s generation is becoming increasingly aware of its environmental impact, with many movements focusing on ‘saving the planet’ gaining traction, both in practice as well as in the art and fashion industries. The fact that these movements are having a marked impact in the card industry is no surprise. I have been pleased to see an increasing number of customers buying my cards plastic-free (thanks to the ‘eco-sticker, a nifty little low-tack vinyl option that keeps both card and envelope together neatly). In recent times, the greetings card industry has really come on leaps and big, playful tiger bounds when it comes to making positive changes for the sake of the future of the planet. Biodegradable envelopes are becoming more and more popular with buyers who want to make a positive change for the sake of our planet. Sainsbury’s supermarkets recently took the initiative and started offering ‘naked’ cards, with Asda set to follow suit in the new year and Marks and Spencers already piloting the idea in one of its stores as part of its ‘plastic pact’ commitment.

I am confident that with things such as these gaining so much momentum that the future looks much brighter.

How to create original illustrations and overcome creative block

A Guide to Selling Online for Creative Start Ups

Packaging: How much of a punch does it actually pack?

Trade shows – Are they worth it for small businesses?

We Are Tits: The female-led pop up shop supporting breast cancer charity ‘Coppafeel’

So you’ve gone and started a blog, have you?

We use cookies on our website to give you the most relevant experience by remembering your preferences and repeat visits. By clicking “Accept All”, you consent to the use of ALL the cookies. However, you may visit "Cookie Settings" to provide a controlled consent.
Cookie SettingsAccept All
Manage consent

This website uses cookies to improve your experience while you navigate through the website. Out of these, the cookies that are categorized as necessary are stored on your browser as they are essential for the working of basic functionalities of the website. We also use third-party cookies that help us analyze and understand how you use this website. These cookies will be stored in your browser only with your consent. You also have the option to opt-out of these cookies. But opting out of some of these cookies may affect your browsing experience.
Necessary Always Enabled
Necessary cookies are absolutely essential for the website to function properly. These cookies ensure basic functionalities and security features of the website, anonymously.
Functional
Functional cookies help to perform certain functionalities like sharing the content of the website on social media platforms, collect feedbacks, and other third-party features.
Performance
Performance cookies are used to understand and analyze the key performance indexes of the website which helps in delivering a better user experience for the visitors.
Analytics
Analytical cookies are used to understand how visitors interact with the website. These cookies help provide information on metrics the number of visitors, bounce rate, traffic source, etc.
Advertisement
Advertisement cookies are used to provide visitors with relevant ads and marketing campaigns. These cookies track visitors across websites and collect information to provide customized ads.
Others
Other uncategorized cookies are those that are being analyzed and have not been classified into a category as yet.
SAVE & ACCEPT